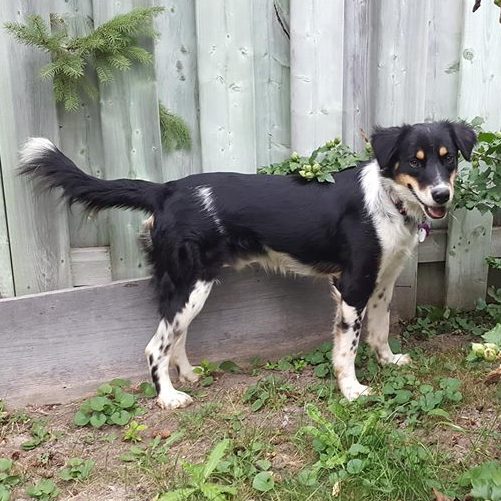 Marlo is quiet and very touchy-feely. He loves to give hugs and kisses, but he needs to learn that he can’t assault you with them at every opportunity.

He’s very rambunctious and playful with other dogs. He’s a patient eater and loves treats. He seems to understand sit, lay down, down, and no, but doesn’t always listen on the first try. He does have a fair bit of energy but settles down with a couple of walks and some play time in the yard. He will need some more house training but is fine as long as you keep a tight schedule. He walks really well and doesn’t pull too much, I think it’ll be short work getting him to walk like a pro. He does show some prey drive around birds and squirrels but nothing too unmanageable. He barks (quietly, easy to ignore) for a few minutes when he goes into his crate but settles down fine. He eats in his crate but won’t go in to just hang out. He will get into mischief if unsupervised, the corner of my couch cushion and some of my socks have fallen victim to his cute little jaws. Thank god the couch was free and I hate it haha.

Oh, and he’s made of cashmere. He has the softest fur of any dog I’ve ever pet, which is saying something.